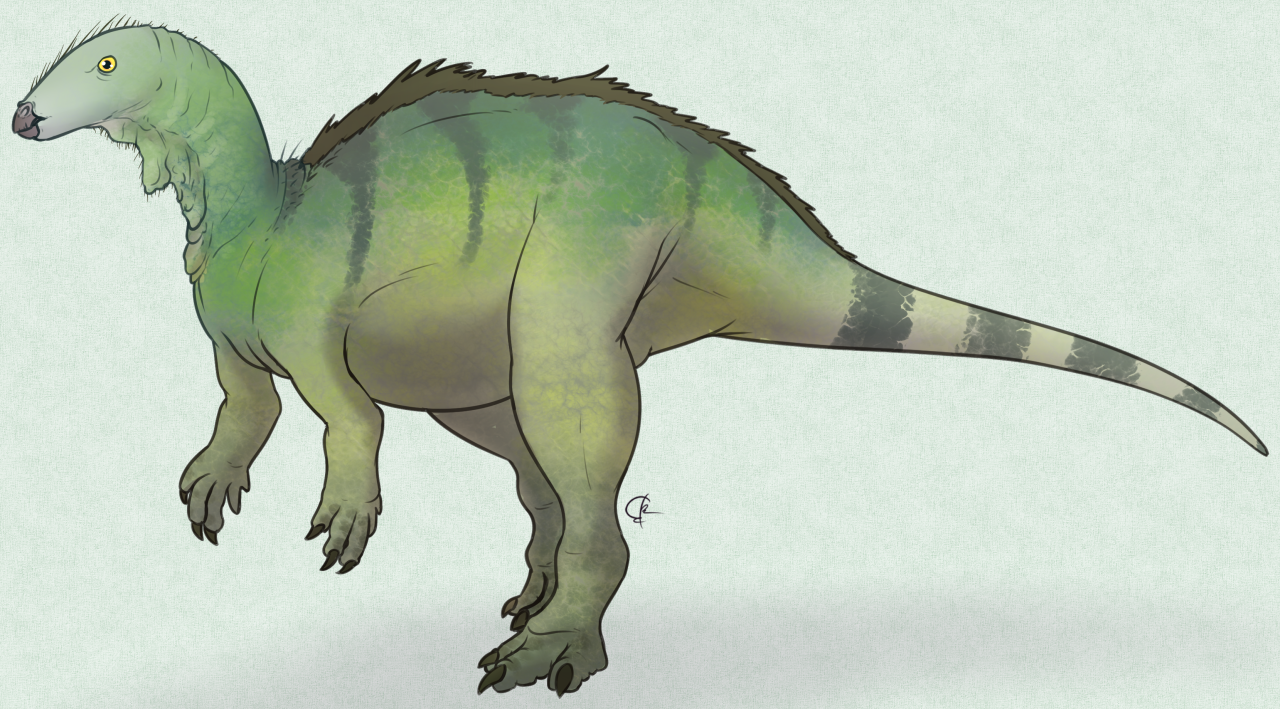 By José Carlos Cortés Etymology: Colossal Iguana First Described By: McDonald et al., 2010 Classification: Dinosauromorpha, Dinosauriformes, Dracohors, Dinosauria, Ornithischia, Genasauria, Neornithischia, Cerapoda, Ornithopoda, Iguanodontia, Dryomorpha, Ankylopollexia, Styracosterna Status: Extinct Time and Place: Between 129 and 123 million years ago, sometime between the Barremian and Aptian ages of the Early Cretaceous  Iguanacolossus is known from the Yellow Cat Member of the Cedar Mountain Formation in Utah  Physical Description: Iguanacolossus was a large, bipedal herbivore, similar in general shape to the earlier Camptosaurus from the same region of North America. As its name would suggest, it was fairly large and robust, reaching 9 meters long and 3 meters in height at the hip – making it longer than the width of a truck and much taller than a person. Known from decent, if scattered, remains, we have parts of the legs, tail, hips, back, and skull. However, we do not have the hands of this dinosaur; though it was touted as being a thumb-spiked dinosaur, we cant actually be certain it had a large one; most members of the group have reduced thumbs spikes, rather than the large and distinctive structure of Iguanodon itself. Iguanacolossus had a long, narrow skull, filled with teeth for chewing up plant material, and a beak to aid in snipping off leaves prior to chewing. Its teeth had thickened enamel, to aid in chewing. Iguanacolossus would have slid its lower jaw into its upper jaw to chew, using the serrations created by the closely packed teeth to slice up the plant material. Iguanacolossus would have had a thickened tail to aid in walking, and a thick, muscular neck. Though only one specimen of Iguanacolossus is officially described, more specimens from juveniles and subadults are known and assigned to the genus in a thesis publication; an official peer-reviewed article is necessary to definitively assign these bones to Iguanacolossus, but for now the association seems likely given they come from the same time and place, and they have similar morphologies. These skeletons indicate that Iguanacolossus went through very rapid growth during development, aiding in reaching such a large size. This also helps to point to Iguanacolossus being warm-blooded and active (as is probably the case for all dinosaurs). In fact, Iguanacolossus shows growth patterns similar to the later Maiasaura, indicating that hadrosaur-like growth and development evolved quickly in their family tree. Given its large size and relatives with scales, Iguanacolossus would have been mostly, if not entirely, scaly. Any feathers left on its body would have been ornamental – for display only. Diet: Medium-level browser of plant material; Iguanacolossus would have been able to eat tough vegetation given its increased chewing abilities and strong enamel.  By Lukas Panzarin, CC BY 2.5 Behavior: Given that Iguanacolossus was found with one single specimen, and its relative Iguanodon was actually a fairly solitary animal, its likely that Iguanacolossus would have traveled and fed alone in its environment, only congregating into groups to take care of its young. Its possible, however, given the probable group of juveniles collected elsewhere, that the young did congregate together until reaching maturity. Their large size at this point would have allowed Iguanacolossus to take care of itself just fine without help from other members of the herd. This would have allowed individual Iguanacolossus to find more food on its own, which, combined with its ability to chew tough plant material, indicates at least some seasonal changes in vegetation that reduced the amount of soft plants to eat. Ecosystem: Given the presence of extensive mudstone and other evidence of water in the Yellow Cat Member, this represented a fairly wet time in the history of the region, as opposed to other times in the Cedar Mountain Formation or the early Morrison Formation that were marked with extensive arid climates. Lakes and rivers filled the floodplain region and provided a variety of habitats for Iguanacolossus to move around in. Still, it would have been semi-arid, and its possible that the mudstones were the result of seasonal changes in water level. Iguanacolossus shared its environment with a variety other dinosaurs, including the other Ornithopods Hippodraco and Cedrorestes; the ankylosaur Gastonia; the sauropods Mierasaurus and Cedarosaurus; the early Therizinosaurs Martharaptor and Falcarius; the large (and weird) Dromaeosaur Utahraptor and the somewhat more normal Dromaeosaur Yurgovuchia; the Troodontid Geminiraptor; and the early Ornithomimosaur Nedcolbertia. Non-dinosaurs were present as well, of course – notably the tuatara relative Toxolophosaurus, turtles such as Glyptops; multiple types of fish; and the mammal Cifelliodon. Other: Iguanacolossus may have been able to walk quadrupedally, but thats difficult to determine without forelimb fossils. ~ By Meig Dickson Sources under the cut  Burton, D., B. W. Greenhalgh, B. B. Britt, B. J. Kowallis, W. S. Elliot, R. Barrick. 2006. New radiometric ages from the Cedar Mountain Formation, Utah and the Cloverly Formation, Wyoming: implications for contained dinosaur faunas. Geological SOciety of America Abstracts with Programs 38 (7): 52. Carpenter, K. 2006. Assessing Dinosaur Faunal Turnover in the Cedar Mountain Formation (Lower Cretaceous) of Eastern Utah, USA. Mesozoic Terrestrial Ecosystems 21 – 25. Garrison, J. R., D. B. Brinkman, D. J. Nichols, P. Layer, D. L. Burge and D. Thayn. 2007. A multidisciplinary study of the Lower Cretaceous Cedar Mountain Formation, Mussentuchit Wash, Utah: a determination of the paleoenvironment and paleoecology of the Eolambia caroljonesa dinosaur quarry. Cretaceous Research 28:461-494 Kirkland, J.I., S. K.Madsen. 2007. The Lower Cretaceous Cedar Mountain Formation, eastern Utah: the view up an always interesting learning curve. Fieldtrip Guidebook, Geological Society of America, Rocky Mountain Section. 1-108 p. McDonald, A. T., J. I. Kirkland, D. D. DeBlieux, S. K. Madsen, J. Cavin, A. R. C. Milner, L. Panzarin. 2010. New basal iguanodonts from the Cedar Mountain Formation of Utah and the evolution of thumb-spiked dinosaurs. PLoS One 5 (11): e14075: 1 – 35. Miller, R. D. 2016. The Lower Cretaceous Cedar Mountain Formation of eastern Utah: A Comparison with the Coeval Burro Canyon Formation, Including New Measured Sections on the Upcompahgre Uplift. UtahState University All Graduate Plan B and other Reports: 829. Sartin, C. E. 2017. An Osteohistologic Analysis of Growth in Ornithopoda. Johns Hopkins University Graduate Thesis. 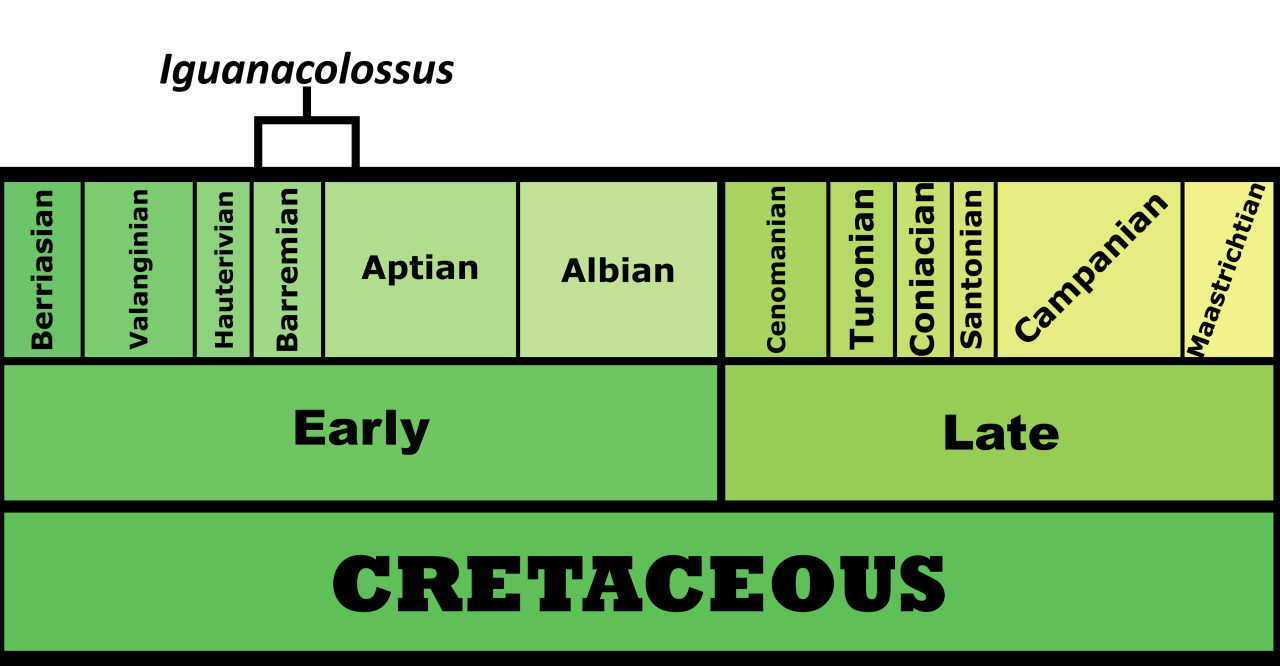